You are using an outdated browser. Please upgrade your browser to improve your experience.
by Bryan M. Wolfe
September 21, 2012
The folks at Double Helix Cables have a direct message for anyone looking to buy a Lightning cable or connector not made specifically for Apple. Don’t do it, according to AppleInsider. A new teardown finds that Apple’s newest cable comes with authentication chips, which are located between the V+ contact of the USB and the power pin on the new Lightning plug. Because of this, it would have been next to impossible for third-party manufacturers to have already produced less expensive, generic cables by this time. First introduced on Sept. 12, the Lightening cable arrived first on the iPhone 5. However, it will soon become standard on all Apple mobile devices. It replaces the 30-pin dock connector that Cupertino had used for over a decade. According to Peter at Double Helix Cables, in an email to AppleInsider:

There is basically no way those are functional cables. You can't just build a Lightning cable by making something with the same shape and connectivity, and my teardown proves that. The chip has to be there, and it is directly in the signal path of the V+ wire.

Characterizing the connector as "very fragile" once the metal protective shield has been removed, he nonetheless thought it was "extremely tough" when the cable is intact. For now, our advice to readers is to only purchase connectors available through Apple. These include the $29 Lightning to 30-pin adapter, the $19 Lightning to USB cable, and the $39 Lightning to 30-pin adapter (0.2 m). Unfortunately, none of these are in stock until October. For further reading on Lightning, be sure to check out New Lightning Connector May Support USB Hosting and Updated: Apple Is Not Including A Lightning To 30-Pin Adapter With The New iPhone 5. Source: AppleInsider 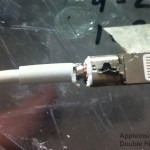 Why You Should Avoid Third-Party Lightning Cable Products

Why You Should Avoid Third-Party Lightning Cable Products
Nothing found :(
Try something else