You are using an outdated browser. Please upgrade your browser to improve your experience.
by Brent Dirks
September 17, 2012
Well that didn’t take long. Just days after Apple introduced the new iPhone 5 with the smaller Lightning dock connector, third-party manufacturers have already begun selling 30-pin adapters that are substantially cheaper than Apple’s own solutions. According to 9to5Mac, Amazon sellers Nanotch and iTronz are offering pre-orders for versions of the adapters. The pictured Nanotch adapter is $17.95, plus $4.95 shipping, and will be released on Sept. 30. The iTronz solution is priced at $9.99, plus $2.50 shipping, with a release date of Oct. 5. There are also numerous sellers on eBay offering both types of the adapters. Those prices are substantially cheaper than Apple’s own $29 and $39 versions of the adapter that are listed for shipping sometime in October. The smaller dock connector, besides causing headaches for consumers who have already purchased 30-pin dock accessories, has been controversial even before the new iPhone was announced. A report earlier in the month said that Apple would be the sole seller of the adapters and they would only cost $10 each. Thanks to a mixup on Apple's site early Friday morning, many who pre-ordered an iPhone 5 believed that one adapter would come with the new handset. But that hope was quickly squashed. While the third-party adapters might save some money, I’ve do wonder how reliable the technology will be. I would rather pay a little more and know that my other accessories and new iPhone will work just fine. Source: 9to5Mac 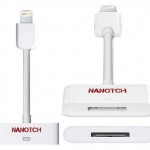