You are using an outdated browser. Please upgrade your browser to improve your experience.
by Joe White
October 30, 2012
Not long ago, we told you Apple had made some major changes to its executive team. Namely, Scott Forstall will be leaving his current role and acting as an "advisor" to Apple CEO Tim Cook up until 2013, at which point he'll leave the company for good. Now, we're hearing from The Wall Street Journal that Forstall's gradual removal from the company is happening because he refused to sign Apple's iOS 6 Maps apology. The Journal reports:

Apple Inc. executive Scott Forstall was asked to leave the company after he refused to sign his name to a letter apologizing for shortcomings in Apple’s new mapping service, according to people familiar with the matter. ... Mr. Forstall, a 15-year Apple veteran, was a protégé of Mr. Jobs, and his name was once bandied about as a possible successor. He rose quickly at the company and earned a reputation for risk taking. But he was also known as difficult to work with, and “never fit into the culture of Apple,” said one person familiar with the matter.

As we explained yesterday, other Apple execs will now take on additional roles in order to compensate for Forstall's removal from the company:

Ive, who serves as Apple’s senior vice president of industrial design, will now provide “leadership and direction for Human Interface (HI)” design across the company. Cue, who as the senior vice president of Internet software and services, helped create the iTunes Store, the App Store, the iBookstore, and iCloud. He will now take on the additional responsibility of Siri and Maps. In doing so, the company’s entire line of online services will be in one group for the first time. Finally, Bob Mansfield will lead a new group, Technologies. This group combines the company’s wireless teams into one organization, which will also include Apple’s semiconductor team.

There was a time when some of us thought Scott Forstall was Apple leadership material. He seemed to share in Jobs' powerful charisma and always commanded presence when presenting at WWDC, and other special events. However, if The Wall Street Journal has its facts right, it seems Forstall is leaving the company because he refused to sign Apple's open letter, in which the company apologized for the iOS 6 Maps app:

How do you feel about the above? Sad to see Forstall leave Apple? We sure are. Source: The Wall Street Journal 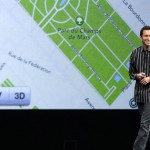 Controversial: Forstall Fired For Refusing To Sign Maps Apology?
Nothing found :(
Try something else