You are using an outdated browser. Please upgrade your browser to improve your experience.
by Joe White
September 21, 2012
It seems the iOS 6 Maps app worked better for me in "beta," because since updating to the final version of iOS 6, I - like countless other iDevice owners - have had more than a spot of trouble getting 3-D images to render properly on my handset. Either that, or the iPhone (4S) takes an age even just to load up the half-composed three-dimensional display. Folks have naturally criticised Apple regarding this problem, and now the Cupertino, Calif. company has spoken out about the problems many are facing with the iOS 6 Maps app. In a nutshell, Apple advises people to be a little more patient. It's going to get better, Apple claims, if people just give iOS 6 a little time. Here are Apple's comments, via All Things Digital:

Customers around the world are upgrading to iOS 6 with over 200 new features including Apple Maps, our first map service. We are excited to offer this service with innovative new features like Flyover and Siri integration, and free turn by turn navigation. We launched this new map service knowing that it is a major initiative and we are just getting started with it. We are continuously improving it, and as Maps is a cloud-based solution, the more people use it, the better it will get. We’re also working with developers to integrate some of the amazing transit apps in the App Store into iOS Maps. We appreciate all of the customer feedback and are working hard to make the customer experience even better.

Is that a good enough answer? Would you rather Apple had kept Google Maps in iOS 6, while slowly integrating its new mapping software, in order to avoid the situation we're presently in? Let us know in the comments. Source: All Things Digital 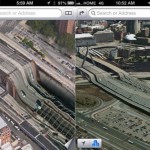 Apple Speaks Out About Buggy iOS 6 Maps App
Nothing found :(
Try something else