You are using an outdated browser. Please upgrade your browser to improve your experience.
by Bryan M. Wolfe
October 15, 2012
The relationship between Apple and Samsung has gone from “love-hate” to “hate-hate,” as patent fights between the two technology companies continue. In fact, according to a senior Samsung official, Apple has all but indicated that the relationship is over, or will be soon, according to The Korean Times. Once Apple’s largest supplier of mobile parts, Samsung’s fingerprints on the iPhone 5 are largely absent. The Korean company is only producing the device’s new A6 chip. And even here, the company’s influence is all but gone. According to the Samsung official:

Samsung’s agreement with Apple is limited to manufacturing the A6 processors. Apple did all the design and we are just producing the chips on a foundry basis.

Samsung had also supplied screens for previous iOS devices. With the iPhone 5, Sharp Corp., LG Display, and Japan Display are the ones doing that job. Future iOS devices, such as the rumored "iPad Mini" and fourth-generation iPad are also likely to come Samsung-free. In August, Apple was awarded $1 billion after successfully suing Samsung in court. In that case, a Calif. jury concluded that Samsung devices infringed on several of Apple’s patents. Other lawsuits are ongoing around the world. All of this bickering comes at a time when Samsung is making important gains in the smartphone industry. In August, the Samsung Galaxy S III bested the iPhone 4S in sales for the first time to become the best-selling smartphone in the U.S. While the iPhone 5 will likely retake that crown for Apple very soon, the battle will probably become even more heated going forward. We'll keep you updated. For more on the unraveling relationship between Apple and Samsung, see Copycat Samsung Still In Apple’s Doghouse and New Survey Suggests The iPhone 5 Is Besting The Galaxy S III. Source: The Korean Times 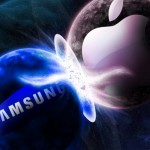 Forget Being Frenemies, There Is A Lot Of Hate Between Apple And Samsung

Forget Being Frenemies, There Is A Lot Of Hate Between Apple And Samsung
Nothing found :(
Try something else