You are using an outdated browser. Please upgrade your browser to improve your experience.
by Bryan M. Wolfe
October 22, 2012
The longtime crystal display panel partnership between Apple and Samsung is coming to an end. The South Korean company has announced that they would terminate the existing contract with Apple, a decision that takes effect next year, according to The Korea Times. Proving once again that the relationship between Apple and Samsung has deteriorated perhaps to a point of no return, this announcement shouldn’t come as a surprise. In fact, it only confirms what we already know: Apple had already cut Samsung out of their display supply chain. With the iPhone 5, for example, Samsung’s fingerprints are largely absent. The company is only producing the device’s new A6 chip. In the past, iPhones included Samsung displays. This time around, Sharp Corp., LG Display, and Japan Display are sharing that job. Future iOS devices, such as the rumored “iPad Mini” and fourth-generation iPad are also likely to come Samsung-free. Once Apple’s largest mobile parts supplier, Samsung is persona non grata in Cupertino. Much of this stems from the ongoing legal battles being fought between the tech giants over patent rights around the world. In August, Apple was awarded $1 billion after successfully suing Samsung in court. In that case, a Calif. jury concluded that Samsung devices infringed on several of Apple’s patents. Other lawsuits are ongoing. To offset the loss, Samsung plans on selling more displays to their own handset division, as well as to Amazon, which sells the Kindle Fire HD. Source: The Korea Times 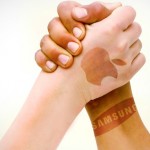 Samsung Tells Apple To Kiss Off, Terminates Contract
Nothing found :(
Try something else