You are using an outdated browser. Please upgrade your browser to improve your experience.
by Joe White
October 31, 2012
Our friends over at Jailbreak Nation have taken Siri, Google Now and Google Voice Search for a spin, and have produced a head-to-head video that puts the three "virtual assistants" in direct competition with one another. The results, as you'd probably expect, are interesting. Being already far from perfect (despite purported "improvements" made in the recently launched iOS 6), Siri indeed has some serious competition in Google Voice Search, as the below video demonstrates. Perhaps the biggest problem with Siri on my iPhone 5 is the length of time queries take. I can ask a question, and, despite having a solid Wi-Fi or 3G connection, Siri can take an age to search for answers and speak them back to me. That is, when she (or rather "he," as he is here in the UK) can understand my accent. Neither of these issues have surfaced when using Google Voice Search, which was recently integrated within the Google Search iOS app. Instead, the application quickly recognises what I've just said, and performs the appropriate search. In short, I'm impressed. Hopefully Apple can beef up Siri in the near future, or at least with iOS 7 (which, however, is a long way away!). In the meantime, take a look at the aforementioned video, and let us know your thoughts on the Apple-Google voice search competition in the comments. http://www.youtube.com/watch?v=lUzCCPCleDA&feature=player_embedded 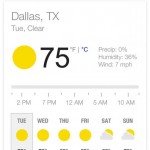 Video: Does Siri Have Some Serious Competition In Google Voice Search?

Video: Does Siri Have Some Serious Competition In Google Voice Search?
Nothing found :(
Try something else