You are using an outdated browser. Please upgrade your browser to improve your experience.
by Bryan M. Wolfe
November 5, 2012
Apple has announced that they have sold 3 million Wi-Fi only iPads over the course of the previous three days. This is double the number of third-generation Wi-Fi only iPads sold over the same time frame in March. According to Tim Cook, Apple's CEO:

Customers around the world love the new iPad mini and fourth generation iPad. We set a new launch weekend record and practically sold out of iPad minis. We're working hard to build more quickly to meet the incredible demand.

Apple did not break down sales figures between the iPad mini and iPad with Retina display. Wi-Fi + Cellular iPad models are set to arrive in mid-November. Meanwhile, three days after it first arrived in stores, the iPad mini is sold out in six out of 10 Apple retail locations in the U.S. The $329 16GB model appears to be the most popular, according to AppleInsider. In a survey of locations across the country, Topeka Capital Markets has determined that the least expensive iPad mini is completely sold out. The 32GB model, by contrast is no longer available in 90 percent of the locations surveyed. If you’re still looking to buy an iPad mini, the $529 64GB model could be your best bet. Among stores with remaining stock, just 14 percent sold out of the model in black and slate, while 10 percent were sold out of the white and silver model. Finally, the survey found that 48 percent of respondents did not own a tablet prior to buying an iPad mini. The iPad mini, like the fourth-generation iPad, arrived in stores on Friday, Nov. 2. However, these were Wi-Fi only models. By mid-November, Wi-Fi + Cellular models are expected to begin arriving in stores around the globe. For more information on Apple's new tablets, see New Survey Claims 75 Percent Of iPad mini Buyers Are Keeping The Full-Size Tablet, Too, AppAdvice Goes Hands-On: Is The iPad mini Worth It?, and The iPad mini Takes On Google’s Nexus 7 In Video Comparison. Have you purchased an iPad mini? If so, which model? Sources: Apple, AppleInsider 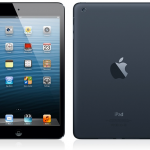 Apple: 3 Million iPads Sold In Three Days
Nothing found :(
Try something else