You are using an outdated browser. Please upgrade your browser to improve your experience.
by Brent Dirks
November 13, 2012
Nokia is bringing yet another mapping option to iOS users. The company announced today that its HTML 5 powered HERE mapping service will be hitting the App Store soon. Along with offline capabilities, the iOS app will include voice-guided walking navigation and public transportation directions. The app will also have the usual map, satellite, and live traffic views.

"People want great maps, and with HERE we can bring together Nokia's location offering to deliver people a better way to explore, discover and share their world," said Nokia President and CEO Stephen Elop. "Additionally, with HERE we can extend our 20 years of location expertise to new devices and operating systems that reach beyond Nokia. As a result, we believe that more people benefit from and contribute to our leading mapping and location service."

Beyond the iOS app, the service will be available on other mobile platforms like Windows Phone and Android. Nokia’s solution does look like it is designed specifically to take on Apple’s own Maps app that has been swamped with criticism since iOS 6 was released earlier this fall. Apple CEO Tim Cook offered an apology to users in late September while offering alternative services for users. The criticism also apparently caused Scott Forstall to leave Apple after he refused to sign the apology letter. Google has apparently been creating its own Maps app in an attempt to return to iOS 6. But sources at the company recently stated they believed the app would never be approved by Apple. But if Nokia’s free solution does indeed appear in the App Store soon, I really can’t see a reason Apple would not approve Google’s own version. It should be interesting to watch. Via: Engadget 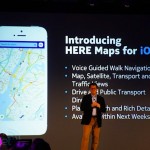 Nokia Is Here To Provide Another Free Mapping Option For iOS Users
Nothing found :(
Try something else