You are using an outdated browser. Please upgrade your browser to improve your experience.
by Joe White
November 6, 2012
Not long ago, we told you that the iPad mini had been jailbroken. Now, we've heard that the fourth-generation iPad has also been hacked into running the Cydia Store app, thanks to the work of the iOS hacker @chpwn. But don't get too excited, because this jailbreak solution unfortunately can't be released to the general public. The news came in a Twitter update:

It doesn't look any different than on the iPad (3rd generation), but here's Cydia running on the iPad (4th generation): twitter.com/chpwn/status/2… — Grant Paul (chpwn) (@chpwn) November 5, 2012

Technically the jailbreak solution developed here is a "fakebreak," which can't be released to the general public because it relies on files that Apple has protected by copyright. However, the fact that @chpwn has managed to hack the iPad 4, which boasts an Apple A6X processor, is nevertheless good news for the jailbreak community. Hopefully, it shouldn't be too long until we have an actual jailbreak solution for both the iPad mini and iPad 4. If any more news hits the Web, we'll let you know. Source: Twitter 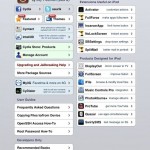 Now The iPad 4 Has Been Jailbroken, Too

Now The iPad 4 Has Been Jailbroken, Too
Nothing found :(
Try something else