You are using an outdated browser. Please upgrade your browser to improve your experience.
by Jamie Young
November 17, 2012

Earlier this year, we tested out the Architect stylus by Arctic and we loved it. Arctic recently came out with the Emote stylus this fall, and I had a chance to test it out myself.

I’m no artist, but I am a writer. So having a two-in-one ballpoint pen and stylus is definitely ideal for me. Just pop off the cap and replace it on the other end you’re not using. It’s perfect.

My favorite thing about the Emote stylus is that it comes in four awesome designs: Origami, Universe, Scratch, and Pixel. When I first saw these colors and designs, I immediately thought, “What great stocking stuffers!” Seriously. The colors and designs are perfect.

The Emote works very smoothly with both my iPhone and iPad. It glides along effortlessly, and there is no need to press hard at all. But, just in case you press too hard or wear it down, it also comes with a replacement stylus tip.

If I were to compare it to other styli, it reminds me a lot of the $18 Bamboo stylus: They are both the same thickness, and have a similar feel, but the Bamboo has no ballpoint pen and is shorter. The Bamboo and the Emote both perform the same, as well. So if you don’t need a two-in-one, save the three dollars (though, I think it’s too handy to pass up). And if you already have the Bamboo, save your money unless you are really itching for a stylus with a beautiful design.

And unlike the Cosmonaut stylus, it’s not bulky or awkward to hold and it’s extremely precise.

Essentially, it’s just more natural to hold. It’s just like writing with a pen — and, hey! You can write with a pen, too, if you really want to!

There really isn’t a downside with the Emote. I suppose if I had to pick one it would be price, comparatively. Although I think the price is good, there are some other two-in-one styli on the market that are cheaper. However, with Arctic, I believe you pay for both quality and design. Though I have not personally tried every stylus on the market, I can attest, from experience, that most cheaper styli aren’t as effective or break easily.

I’m a sucker for the two-in-one functionality as well as the amazing designs. The Emote gets my two thumbs up, and I think I’ll even buy some as presents for the holidays. The Arctic Emote stylus just screams stocking stuffer — doesn’t it?

The Emote is fully compatible with all iPads and iPhones (and even some other devices that don't have "i" in front of them). You can purchase the Emote stylus directly from Arctic for $21.95. 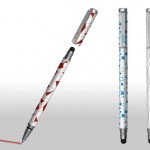 The Arctic Emote Stylus May Be The Perfect Stocking Stuffer

The Arctic Emote Stylus May Be The Perfect Stocking Stuffer
Nothing found :(
Try something else