You are using an outdated browser. Please upgrade your browser to improve your experience.
by Aldrin Calimlim
December 29, 2012
As the year draws to a close, Apple has withdrawn its patent claims against one of Samsung's allegedly infringing products. According to Reuters, Apple has dropped its infringement case against the Samsung Galaxy S III Mini. The Galaxy S III Mini is an Android smartphone that is equipped with, most notably, a high-end Super AMOLED display. Released just last month, the Galaxy S III Mini was not included in the landmark $1 billion lawsuit that concluded earlier this year in favor of Apple. However, the device was added last month by Apple to its ongoing patent case against Samsung on account of its availability in the U.S. through Amazon.com. But Samsung maintained that it is not "making, using, selling, offering to sell or importing the Galaxy S III Mini in the United States." Consequently, Apple has agreed to exempt the device from litigation in a court filing yesterday in U.S. District Court in San Jose, just east of Cupertino in California. But the iDevice maker agrees only on the condition that "the current withdrawal will not prejudice Apple’s ability later to accuse the Galaxy S III Mini if the factual circumstances change." So, while Samsung is off the hook with regard to the Galaxy S III Mini, it better not make, use, sell, offer to sell, or import the device in the U.S. in the future. Or Apple is liable to put the Galaxy S III Mini back on its patent infringement watch list. Source: Reuters Via: The Verge 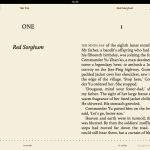 Apple Fined By Chinese Court Over E-Book Copyright Violation
Nothing found :(
Try something else