You are using an outdated browser. Please upgrade your browser to improve your experience.
by Casey Tschida
December 5, 2012
When word came that iOS would no longer have an integrated YouTube app, iDevice owners began wondering what, if anything, would replace it. Google did end up releasing an official app and making improvements to the mobile website, although, many were unimpressed, particularly because the replacement wasn't even a native iPad app. Now, nearly two months later, the YouTube app is finally universal, plus contains a couple of other obvious and basic features. Primarily just expanding the video list columns and allowing the side toolbar to be shown at the same time as the lists, the iPad user interface is a weak attempt by Google to make iOS tablet owners happy. Well, at least the UI and videos don't need to be scaled by two times. As for iPhone 5 and fifth generation iPod touch optimization, that speaks for itself. In addition to the slight UI modifications, Google has added the ability to edit playlists, plus the opportunity to actually tap on URLs in video descriptions to go to the linked pages. If you'd like to see a brief demonstration of the new features, Tom from jailbreaknation.com has posted a YouTube update highlight video. Likely echoing most users, I am happy about an iPad user interface and non-scaled videos, however, the YouTube app is still a sad attempt. I'm especially disappointed in the lack of effort in creating a very efficient, yet clutter-less UI and missing options. I wonder if Google is competing with Facebook to be the slowest to include the obvious features. The official YouTube app is compatible with iPad, iPhone 3GS, third generation iPod touch, and newer running iOS 5.0 or later, and available in the App Store as a free download. [gallery link="file"] 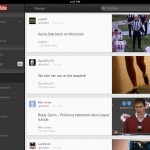 The Official YouTube App Finally Goes Universal
Nothing found :(
Try something else