You are using an outdated browser. Please upgrade your browser to improve your experience.
by Aldrin Calimlim
January 8, 2013
Many scam apps pass muster with Apple's App Store review team. But there are apps that get rejected outright by Apple although they are in no way fraudulent in nature. One such app, as pointed out by io9, is Endgame: Syria. Endgame: Syria has recently been rejected entry to the App Store as it has been deemed by Apple to be in violation of one of its guidelines. The guideline in question states that "'Enemies' within the context of a game cannot solely target a specific race, culture, a real government or corporation, or any other real entity." Developed by Auroch Digital, Endgame: Syria is a game that aims to aid players in understanding the ongoing civil war in Syria. According to its description in Google Play, where it has been available for download onto Android devices, it is a "news-game" or "a simulation that uses interactivity to explore a real world event." If you can't see the video embedded above, please click here. In response to Apple's rejection, Auroch Digital designer Tomas Rawlings says:

This decision is a shame really as it makes it hard to talk about the real world. We had hoped that Apple would be more nuanced in how they applied this rule but we got a bit worried when it had been in submission for around two weeks without a decision — we then figured that because of the controversy of using the gaming medium to cover an ongoing war meant passing the game had become an issue for them.

Be that as it may, Auroch Digital still intends to have the game launched in the App Store, albeit in a slightly altered version. In hopes of conforming to Apple's guidelines, the developer plans on making the game less about the Syrian civil war in particular and more about armed conflict in general. This means that it's sure to be released under a "Syria-less" title if and when the game gets approved by Apple. Source: io9 [gallery link="file" order="DESC"] 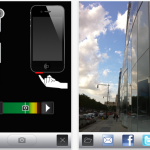 Camera Mic - Take Photos Using Your iPhone's Microphone
Nothing found :(
Try something else