You are using an outdated browser. Please upgrade your browser to improve your experience.
by Brent Dirks
January 9, 2013
The Kickstarter darling Pebble watch will finally begin shipping to backers starting on Jan. 23. The news was announced today during an event at CES 2013 in Las Vegas. With a 1.26-inch backlit e-paper display, the iOS-compatible watch features Bluetooth 4.0 capability. The highlight of the system is its integration with SMS and iMessage along with downloadable watchfaces and other customizable apps. The smart watch took Kickstarter by storm in early 2012. Backers pledged more than $10 million, making it the most popular project to date on the service. Delivery was originally estimated for September, but the watch just received FCC approval in late December. If you weren’t a Kickstarter backer and are interested in purchasing the watch, you can preorder it on Pebble’s site. Shipping date is only listed as “early 2013.” It is compatible with the iPhone 3GS, 4, 4S, 5, and any iPod touch with iOS 5 or 6. The watch is available in black, gray, red, or orange with black bands, and a white watch with a white band. Are you interested in the Pebble? While I think it looks nice, I’m still hoping that the rumored ‘iWatch’ from Apple will make an appearance sometime this year. 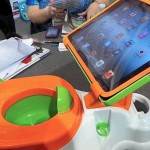 CES 2013: The iPotty Might Easily Be The Craziest iPad Accessory You’ll Ever See 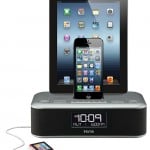