You are using an outdated browser. Please upgrade your browser to improve your experience.
by Brent Dirks
March 14, 2013
The ubiquitous iPad Smart Cover might one day become much more powerful. AppleInsider has the details on a recently discovered Apple patent that describes a wireless inductive charging solution. As most users know, the current Smart Cover and the iPad both have magnets to activate the automatic on-and-off capabilities of the tablet. But the proposed solution adds a battery to the cover for on-the-go charging:

The cover has the usual magnetic attachments and embedded Hall Effect sensor that auto-wakes and sleeps an iPad, but instead of the usual layered padding, the segmented body contains battery cells and necessary wireless charging circuitry. In order to facilitate efficient power transfer, the primary induction transmitter and corresponding receiver in the iPad would be placed as close together as possible. The patent makes use of the Smart Cover's existing magnet tech, which leverages the unique properties of specialized magnets to "automatically" align the cover with the iPad's display.

The charging only happens when the Smart Cover is protecting the display, signaling the tablet isn’t in use. Unfortunately, the Smart Cover would have to be plugged into a power outlet to charge the device. But the patent also hints of using solar panels to gather energy. This isn’t the first sign that the technology might be coming to iOS devices. We reported late last week that Apple may be ready to introduce some type of wireless charging this year. Two other Apple patents discovered last year also covered wireless charging. 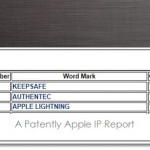 Trademarks For 'AuthenTec' And 'KeepSafe' Now Belong To Apple
Nothing found :(
Try something else