You are using an outdated browser. Please upgrade your browser to improve your experience.
by Aldrin Calimlim
March 13, 2013
Google Now, the intelligent software assistant that debuted last year on Android, may not be available on iOS now, but it's going to be soon. At least that's what this supposedly leaked video suggests. The video in question shows an introductory video for Google Now for iOS. Apparently, the video was prematurely posted by Google on YouTube and hence promptly pulled from the site. But not before an Engadget tipster managed to download a copy and re-upload it online. Take a look: If you can't see the video embedded above, please click here. If this turns out to be a hoax, then it's a really elaborate one. It's interesting to note that the leaked video employs both the same basic structure and voiceover actress as the official Google Now introductory video from last year: If you can't see the video embedded above, please click here. I'm really hoping this is true, as Google Now for iOS sounds quite promising. As shown in the leaked video, if and when it comes, Google Now is going to be an update to the existing Google Search app for iOS. The Google Search app was updated in October last year with Google Voice Search, thereby giving Siri some tough competition. Now, with the presumably imminent arrival of Google Now for iOS, Siri is about to face even tougher competition. 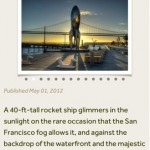 Google’s Field Trip Lands In The App Store
Nothing found :(
Try something else