You are using an outdated browser. Please upgrade your browser to improve your experience.
by Aldrin Calimlim
March 11, 2013
It's late, and whoever's handling the official Twitter account of Apple's iBookstore tonight might have had one drink too many. Or maybe hadn't drunk enough coffee. Either way, he or she has some explaining to do as to how a tweet containing a vulgar slang word ended up being retweeted on the iBookstore's Twitter timeline. The tweet in question was promptly "un-retweeted," but not before many of iBookstore's Twitters followers had taken notice of it. The tweet, (most of) which is shown in the screenshot above, is posted by Alison Agosti, a sketch writer at the Los Angeles division of the Upright Citizens Brigade Theatre. As you can see, tagged in the tweet is @scottsimpson. Scott Simpson is a former Apple employee who used to represent iBookstore. So, the tweet is actually related to iBookstore. What's more, it refers to "introspective novels," many of which can be found in the iBookstore. Whether it was retweeted deliberately or accidentally is unclear. But as noted by 9to5Mac, which first reported on the matter, "Ironically, the contents of this tweet would almost certainly be disallowed in the App Store." If you'll recall, Apple pulled the popular photo-sharing app 500px from the App Store for "featuring pornographic images and material." And when it was restored to the App Store, it had a new age rating of 17 and up. The same age rating was also attached to the popular six-second video sharing app Vine shortly after a pornographic entry was featured in the app's Editor's Picks. 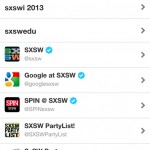