You are using an outdated browser. Please upgrade your browser to improve your experience.
by Aldrin Calimlim
April 2, 2013
Apple has just announced that it will be discussing the financial results of its most recently concluded fiscal quarter later this month. In a new post on its Investor Relations webpage, the company states that it plans to hold a conference call on April 23 at 2 p.m. PT / 5 p.m. ET. The conference call is set to center on Apple's earnings during its second fiscal quarter for 2013. Of course, Apple's Q2 2013 earnings are also expected to be detailed in a press release to be issued on the day of the conference call. During the last quarter, Apple released the 128GB iPad with Retina display and updated the processors and prices of the MacBook Pro with Retina display. The company also set a record when it sold 25 billion songs in the iTunes Store. Moreover, Apple announced its plans for its huge cash balance. As expected, the conference call will be accessible via audio webcast on the Apple Events webpage. If you have an iPhone, iPod touch, or iPad running iOS 4.2 or above, any Mac running OS X 10.5 or above, or any PC running Quicktime 7 or later, you’ll be able to listen to the call live on your device. 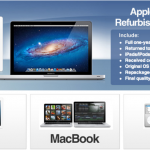 Has Apple's Purported Refurbished Outlet On eBay Gone Out Of Business?
Nothing found :(
Try something else