You are using an outdated browser. Please upgrade your browser to improve your experience.
by Juli Clover
April 12, 2013
Funny or Die’s humorous iSteve biopic on Steve Jobs is set to launch next week, so producer Allison Hord sat down with Bloomberg TV to talk about the project. According to Hord, the project originally started out as a trailer, which eventually escalated into a full blown 80 minute movie. Here’s what Hord had to say about the development of iSteve:

Basically we were having our weekly topical meeting and our creative staff was discussing how Hollywood was turning out all these Steve Jobs biopics. Our writer director Ryan Perez pitched the fake trailer. We do a lot of fake trailers at Funny or Die and someone threw out the joke in the room: ‘What if we just made our own feature about Steve Jobs and threw our hat in the ring?’ I got a big laugh out of that as a producer, but you know at a certain point you can only laugh at your own joke so much before as a company you sort of have to call your own bluff and just do it. So we did it.

The movie stars Justin Long, who famously worked with Apple on its long running “I’m a Mac” promotion. Justin Long jumped at the chance to team up with Funny or Die. Hord detailed Long’s reaction in the interview:

He loved it. It’s such a crazy idea and it’s a fun idea and he had a great time doing it. He was the consummate professional. He learned an 81-page script in three days and he had fun poking fun at his campaign with Apple as well in the filming of the movie. He was a great sport and the perfect choice to play our Steve Jobs.

After deciding to go ahead with a full length movie in lieu of a simple trailer, the Funny or Die team was determined to be the first to launch a Steve Jobs biopic. As you probably know, the JOBS biopic starring Ashton Kutcher is set to launch later this year, and Aaron Sorkin is also working on his own version, based on Walter Isaacson’s best selling book. To launch first, Ryan Perez wrote the Funny or Die script in three days, and the movie was filmed in five. According to Hord, the humorous movie is “respectful,” and should not upset fans of Steve Jobs. She also referred to it as “a treat for the Internet,” which is a mighty claim to live up to. You will be able to watch the full length movie on the Funny or Die site on April 15. Until then, take a gander at the trailer below to get a sneak peek. http://www.youtube.com/watch?v=Tk5qClhFqpU 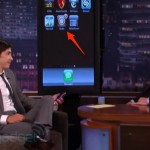 Footage: Justin Long (AKA "I'm A Mac" Guy) & His Jailbroken iPhone
Nothing found :(
Try something else