You are using an outdated browser. Please upgrade your browser to improve your experience.
by Aldrin Calimlim
May 18, 2012
Just a couple of days ago, Sony Pictures announced that Aaron Sorkin has been tapped to pen the studio's adaptation of Walter Isaacson's "Steve Jobs." Today, Reuters reports that the Academy Award-winning screenwriter of "The Social Network" has gone on record saying that the upcoming movie is not going to be a "straight ahead biography." Speaking in a press conference for his upcoming HBO series "The Newsroom," Sorkin said that "it's very difficult to shake the cradle-to-grave structure of a biography." He also said that he's going to be looking for a specific hook on which to hang the as yet untitled movie about Steve Jobs:

"Drama is tension versus obstacle. Someone wants something, something is standing in their way of getting it. They want the money, they want the girl, they want to get to Philadelphia - doesn't matter ... And I need to find that event and I will. I just don't know what it is."

In his script for "The Social Network," the all-important hook lay in the legal battle fought between Mark Zuckerberg and his erstwhile Harvard friends over the development of Facebook. Sorkin, who is set to begin adapting "Steve Jobs" in June, would have to pinpoint a similarly engaging element in the life story of Jobs as told by Isaacson. I'm guessing it would at least incorporate Jobs' departure and subsequent return to Apple, which he co-founded in 1976 with his friend Steve Wozniak. Speaking of Wozniak, Sorkin revealed that the "other Steve" has been hired by Sony Pictures as an advisor on the finer points of computer engineering and other technical considerations of the film. Between this and Sorkin's commitment to the project, that other Steve Jobs biopic with Ashton Kutcher at the lead is gradually becoming the Zune to Sony Pictures' iPod, isn't it? Source: Reuters Via: The Next Web 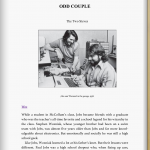 Sorkin To Eschew Cradle-To-Grave Route In Jobs Biopic; Woz Hired As Advisor
Nothing found :(
Try something else