You are using an outdated browser. Please upgrade your browser to improve your experience.
by Joe White
April 15, 2013
With Apple, Samsung and Google all reportedly in the process of creating a so-called "smart watch," a new report claims that Microsoft, too, has joined in the race. Since late 2011, rumors concerning an Apple-developed "iWatch" have been appearing online, with most suggesting that the wearable device might perform similar tasks to a smartphone in a move that aims to revolutionize the wristwatch. More recently, however, a number of reports have noted that both Samsung and Google are looking to develop and market their own smart watch devices, potentially facing Apple's iWatch with some Android-compatible competition. It should come as no surprise, then, that Microsoft also wants in on the action. As explained in an article recently published by The Wall Street Journal, the company is said to have requested wristwatch parts, including 1.5-Inch displays, from its component suppliers:

Earlier this year, Microsoft asked suppliers in Asia to ship components for a potential watch-style device, the executives said. One executive said he met with Microsoft's research and development team at the software company's Redmond, Wash., headquarters. But it's unclear whether Microsoft will opt to move ahead with the watch, they said. [...] For its potential new watch prototype, Microsoft has requested 1.5-inch displays from component makers, said an executive at a component supplier.

If a smart watch really is going to be "the next big thing" to come out of Cupertino, competitors like Samsung, Google and Microsoft are indeed going to want to start working on their rival devices as soon as possible. Though, of course, only time will tell if such rumored smart watches do transpire into reality. We'll keep you posted on that front. In the meantime, iPhone owners can always look to Pebble for their wristwatch iOS notification needs. For more news on the iWatch, be sure to check out the following: Former Adobe Head Could Be Leading Up Apple's "iWatch" Division, Could Fingerprint Authentication Be The Main Selling Point Of Both An iPhone 5S And iWatch?, and Swatch Chief Not Quite Convinced Apple's iWatch Would Work. Source: The Wall Street Journal Via: MacRumors 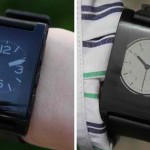