You are using an outdated browser. Please upgrade your browser to improve your experience.
by Aldrin Calimlim
May 14, 2013
Rovio is about to go the way of Chillingo. The Finnish entertainment company behind the Angry Birds franchise has just announced that it's going to begin publishing titles created by third-party developers. This is, of course, what Chillingo has long been doing. In fact, it was Chillingo that published the original Angry Birds game in partnership with Rovio. It's a testament, then, to just how far Rovio has come that it can now launch its very own third-party mobile game publishing initiative. And the initiative is to be called Rovio Stars. If you can't see the video embedded above, please click here. "Rovio Entertainment has positioned itself as one of the powerhouses of mobile entertainment, so moving into publishing is a logical step for us at this point," said Jami Laes, Rovio's EVP of Games. "We want to help our fans find quality entertainment among the more than 100,000 games available in app stores. That’s where Rovio Stars comes in." And the first couple of games to be published under the glittering Rovio Stars banner will be Icebreaker: A Viking Voyage by London-based Nitrome Ltd. and Tiny Thief by Barcelona-based 5 Ants. According to Rovio, Icebreaker: A Viking Voyage, whose trailer is shown above, "follows the adventure of a lone Viking, combining a unique ice slicing mechanic with an offbeat humour." As for Tiny Thief, it's "a beautiful medieval adventure featuring stealth-based puzzles." In my view, Rovio Stars is a great initiative for the company to take, if only because Rovio wouldn't have to focus its attention on milking the Angry Birds cash cow anymore. 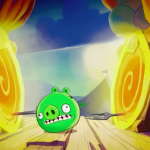 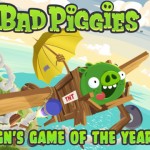 Rovio's Bad Piggies Updated To Add 15 New Sun-Drenched Levels And More
Nothing found :(
Try something else