You are using an outdated browser. Please upgrade your browser to improve your experience.
by Aldrin Calimlim
May 8, 2013
Sharp, the well-known Japanese consumer electronics company, is reportedly set to start production of LCD panels for the so-called iPhone 5S as early as next month. According to the Japanese newspaper Nikkan Kogyo Shimbun, Sharp is scheduled to begin using its Kameyama Plant No. 1 in June to produce the next-generation iPhone's displays. Sharp remains one of the main partner display manufacturers of Apple, even as the latter's biggest competitor, Samsung, now holds a considerable amount of stake in the former. In addition to Sharp, Nikkan Kogyo Shimbun reports that LG Display and Japan Display have been engaged by Apple to manufacture displays for the iPhone 5S. The Seoul-based LG Display is known as the world's largest LCD panel maker. And Japan Display, as noted by Apple Insider, is a company combining the LCD panel businesses of Sony, Hitachi, and Toshiba. Previously rumored to be released this summer, the iPhone 5S is now believed to be launched this fall. It's expected to come in multiple colors and to feature an upgraded processor as well as an upgraded camera. It's also forecast to include a fingerprint scanner. Also a staple of the Apple rumor mill are speculations about a "budget" iPhone. This relatively inexpensive Apple handset is said to have a polycarbonate body and projected to command 11 percent of the low-cost handset market by 2014. 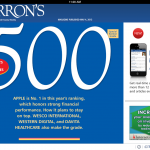 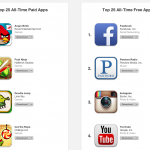 Apple Unveils New Lists Of All-Time Top Apps As It Counts Down To 50 Billion Downloads
Nothing found :(
Try something else