You are using an outdated browser. Please upgrade your browser to improve your experience.
by Joe White
June 12, 2013
All of the built-in apps in Apple's mobile operating system have received a refresh with iOS 7, including the Messages app. Besides a simpler, more minimalistic app icon design, a number of further changes have been made to the much-used application, one of which offers users the ability to block incoming SMS messages or iMessages from particular contacts. In the below hands-on video, we take a closer look at the Messages app as it appears in iOS 7. Perhaps the most notable change, as with the iOS at-large, is the application's new look: Messages is now cleaner, it features less depth, fewer colors, and situates everything against a light background. In addition, however, the "Edit" button in the application has been replaced with "Contacts." From this page, users have the option of accessing information on the contact who they are presently messaging, such as phone number, email address, and more. Importantly, this page also offers users the option of blocking contacts. Once enabled, "Block this Caller" also blocks phone and FaceTime calls, along with SMS messages and iMessages, and is a useful (albeit long-overdue!) feature that iDevice owners will certainly appreciate. You can also block individual contacts from within the dedicated Contacts app, and, though we haven't yet been able to confirm it, we assume that blocked contacts sync between iDevices via iCloud. Below, we've included the aforementioned hands-on video. Check it out and see what you think. http://www.youtube.com/watch?v=6URmGpboaeQ 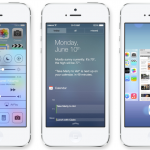