You are using an outdated browser. Please upgrade your browser to improve your experience.
by Aldrin Calimlim
June 11, 2013
When Apple finally took the wraps off the highly anticipated iOS 7, one of the first things we noticed was the revamped iOS lock screen. And we now have a hands-on video to present to you in order to give you a better idea of what to expect from the new lock screen in iOS 7. As you can see in the below demo video put together by my colleague Dom, the new look and feel of the new lock screen is consistent with iOS 7's systemwide redesign. It's clean, it's soothing, and it's simply stunning. But even with its new style, the lock screen still displays the current time, shows music playback controls upon double-tap of the home button, and has a draggable camera launcher button beside the "slide to unlock" text. Now, about that "slide to unlock" instruction. As pointed out in the video, with iOS 7, you can now slide your finger from right to left anywhere on the lock screen to unlock your device. You can slide along the bottom as you, me, and every other iOS user is accustomed to do. You can slide across the middle. Or you can slide at the top. Anywhere on the lock screen. If you can't see the video embedded above, please click here. But if you swipe from the top toward the bottom of the screen, you get to access the overhauled Notification Center, which now includes a "today" view in addition to various notifications. And if you swipe from the bottom toward the top of the screen, you get to see the all new Control Center, which lets you change different settings and launch certain apps. Note, though, that accessing Notification Center and bringing Control Center up from the lock screen are both optional. Of course, a discussion of the new lock screen in iOS 7 wouldn't be complete without mentioning its support for live or dynamic wallpapers, which can be set from the Settings app. If you're a registered iOS developer, you can already check out the new lock screen and other new features in iOS by downloading the iOS 7 beta, which was released by Apple yesterday. The final version of iOS 7 is scheduled for public release this fall. Make sure to stay tuned to AppAdvice as we give you more sneak peeks into some of the most promising features of iOS 7. 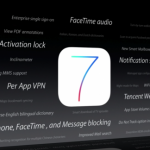 The Elephant In The WWDC Room: What's Up With Apple's Maps App In iOS 7? 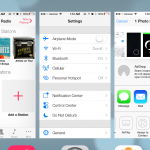 Hands-On With Apple's Jailbreak-Inspired iOS 7 App Switcher
Nothing found :(
Try something else