You are using an outdated browser. Please upgrade your browser to improve your experience.
by Joe White
July 15, 2013
It's bad news for those of you holding out for a Retina display-equipped iPad mini. In a new report from the hit-and-miss publication DigiTimes, it's argued that Apple's small-size tablet isn't going to launch with a Retina display until late 2014, and that this year will rather see a comparably minor upgrade made to the iPad mini in time for the holidays. According to DigiTimes, Apple is reportedly planning "to use Retina panel technology equipped with 2,048 by 1,536 resolution" in the 2014 iPad mini, which will feature a heavily revised, "almost bezel-free" look. This year, however, the company will offer a minor upgrade to the small-size tablet, "which is expected to be lighter, thinner, and equipped with improved specifications," the report claims. DigiTimes' article indeed mirrors a recent report published by Taiwan's Economic Daily News, which also argued that a Retina-equipped iPad mini won't launch until next year. In addition, DigiTimes claims to have information on the next-generation 9.7-inch iPad:

Additionally, the sources said that Apple's upcoming fifth-generation iPad is expected to use thin-film touch screen technology, which will be able to reduce the weight of the device by 20-30%. The device will also feature a slimmer bezel design to allow a bigger viewing area. The fifth-generation iPad 5 is expected to start production in small amounts during July 2013 followed by volume shipments of 2-3 million units in August and September. As of October, shipments of the device are expected to increase another 25-30%, the sources believe.

With no Retina display-equipped MacBook Air having yet launched, Apple fans had hoped that an iPad mini with Retina display might at least grace Apple Store shelves sometime in 2013. In fact, many held out on purchasing the first-generation iDevice last year, in a move motivated by the belief that a Retina display-equipped model was just around the corner. If DigiTimes et al. are to be believed, this unfortunately isn't the case. Apple's iWatch, too, is now rumored to launch in 2014, and as such it could be that Apple stock is not to receive its much-needed boost until next year. We'll keep you updated with further information as we receive it. In the meantime, see: Apple's iPhone 5 Reportedly Kills A Chinese Woman, Download The Newly Updated Umano App And Enter To Win A Brand New iPad mini, and Apple Reportedly Signs A Deal With Samsung For Future iDevice Processors. 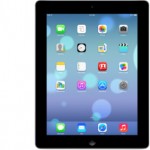 No iPad mini With Retina Display Until 2014
Nothing found :(
Try something else