You are using an outdated browser. Please upgrade your browser to improve your experience.
by Bryan M. Wolfe
July 22, 2013
See update below. Apple was supposed to launch iOS 7 beta 4 to developers later today. That may no longer be the case thanks to the security breach that has shut down the company’s developer center since last Thursday, July 18. As Jamie Young noted on Sunday night, the developer site remains in lockdown as Apple works to resolve security issues. In a statement, Apple explained:

Last Thursday, an intruder attempted to secure personal information of our registered developers from our developer website. Sensitive personal information was encrypted and cannot be accessed, however, we have not been able to rule out the possibility that some developers’ names, mailing addresses, and/or email addresses may have been accessed. In the spirit of transparency, we want to inform you of the issue. We took the site down immediately on Thursday and have been working around the clock since then. In order to prevent a security threat like this from happening again, we’re completely overhauling our developer systems, updating our server software, and rebuilding our entire database. We apologize for the significant inconvenience that our downtime has caused you and we expect to have the developer website up again soon.

This isn’t exactly a great time for the Apple developer site to be offline. Besides the iOS 7 beta, developers are also testing OS X Mavericks before its public release later this year. Since the first iOS 7 beta was released to developers after last month’s WWDC keynote, new versions of the software have been released every two weeks. The last, beta 3, arrived on Monday, July 8. We'll continue to follow this development. Update It looks like the security breach has delayed the launch of the fourth iOS 7 beta. Apple typically releases new betas at 10 a.m. PDT. That time has now passed. See also: Security Researcher May Be The 'Intruder' Behind Apple's Developer Center Shutdown. 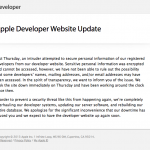 Security Researcher May Be The 'Intruder' Behind Apple's Developer Center Shutdown
Nothing found :(
Try something else