You are using an outdated browser. Please upgrade your browser to improve your experience.
by Bryan M. Wolfe
July 25, 2013
Ashton Kutcher is continuing his press tour for the upcoming movie “Jobs,” in which he plays the late Apple co-founder. On Wednesday, the “Two and a Half Men” star visited “The Tonight Show with Jay Leno.” This followed an interview with The Verge. To Leno, Kutcher noted that he almost met Steve Jobs just six months before his death in October 2011. He noted that this near miss is one of the reasons he wanted to portray Jobs. Take a look: To The Verge, Kutcher noted how he prepared for his role:

To prepare for the role, Kutcher assembled a 15-hour SoundCloud compilation of Jobs' speaking voice, including both public presentations and more candid recordings that captured his habits outside of public life. "There were two versions of him, and I got this from a lot of friends of his that I talked to," Kutcher said. "There was the guy who went on stage and presented things, and then there was the guy who was in the boardroom, who was working on a product, who was having an intimate conversation. And I tried to find little snippets of stuff where he wasn't aware that he was being recorded or speeches that he didn't think anyone was going to hear, so I could get a little more of who he honestly was."

For the entire video interview, click here. “Jobs” arrives in theaters on Aug. 16. See also: New 15-Second Promo Video For 'Jobs' Movie May Be First Ever Instagram Trailer, and Ashton Kutcher Explains Why He Wanted To Portray Steve Jobs. 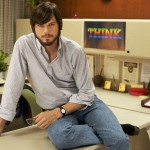 Ashton Kutcher Explains Why He Wanted To Portray Steve Jobs
Nothing found :(
Try something else