You are using an outdated browser. Please upgrade your browser to improve your experience.
by Joe White
July 8, 2013
Target is now offering customers gift cards up to the value of $50 when an iPhone, iPad, iPod touch, or Apple TV is purchased, both in-store and online. First spotted by 9to5Mac, Target's gift card offerings effectively mean customers can grab an iDevice or Apple TV for a slightly reduced price. Below, we've provided an overview of Target's sales, including links to the retailer's online store. Customers purchasing a 16-GB Wi-Fi only iPad with Retina display ($499.99) get a $50 gift card, while Target is offering a $40 gift card when a 16-GB Wi-Fi only iPad mini ($329.99) is purchased. The retailer also notes that its offer supports the iPad 2, along with further configurations including Wi-Fi + Cellular iPad models. The 16-GB iPod touch (fifth-generation) is available with Target for $229.00, and includes a $20 gift card, while the $99.99 Apple TV will secure customers a $10 Target gift card. Finally, Target is offering an activated iPhone 5 with AT&T, Verizon, or Sprint for $149.99, plus a $25 gift card. Customers trading in an old handset can also increase the value of the gift card they receive, Target's ad appears to suggest (pictured above). Not all Target stores are supporting each one of the above products, however. As 9to5Mac explains:

We’ve seen the ads across a couple cities, with some flyers including all of the above deals, but other locations only supporting certain products. For instance, one local Target ad is only promoting the aforementioned iPad with Retina Display, iPad mini, and iPod touch 5th generation deals. It is best to contact your local Target store to confirm the deals that your location supports.

Students looking to buy a Mac, iPhone, or iPad also have the option of receiving an iTunes Gift Card when purchasing directly from Apple, as part of the company's yearly "Back to School" promotion. Apple offers a $100 Gift Card with Mac purchases, and $50 when students purchase an iPhone or iPad. Next-generation iDevices are, however, on the horizon. As a reminder, Apple is expected to launch an iPhone 5S, an iPad mini with Retina display, and a low-cost "budget" iPhone later this year, along with a number of further iOS-powered products (one of which could be the company's anticipated "iWatch"). As fall approaches, we'll likely see similar sales appear online and in-store across the United States, and beyond. We'll keep you updated with further information as we receive it. In the meantime, see: Infinity Blade II And More Go Free In Celebration Of App Store's 5th Anniversary, Today's Best Apps: Laser Chambers, Prison Break Run And 8 Bubbles, and Quirky App Of The Day: In Climbing Chaos, The Floor Really Is Lava. 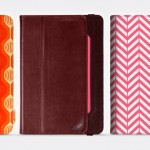 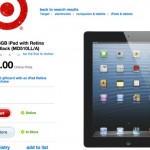 Thanks Target, You Saved Me $40 On My New iPad Purchase
Nothing found :(
Try something else