You are using an outdated browser. Please upgrade your browser to improve your experience.
by Brent Dirks
August 20, 2013
Plants vs. Zombies 2, which finally landed in the App Store last week, is officially a hit. Joystiq reported from EA’s Gamescom press conference in Cologne, Germany where COO Peter Moore fired off some interesting stats about the title, which has been downloaded more than 16 million times so far:

Chief Operating Officer Peter Moore revealed that 11.4 billion suns have been collected in the game, and over 2 billion zombie waves have been fought with over 4 billion rooted plants. In total, Plants vs Zombies 2 players have sunk 15,071,541,100 hours into the game.

Another EA official also announced that plans are in the works for the first major update, entitled Far Future. That was the only detail revealed. After a number of delays, the much-anticipated title rolled out worldwide on Thursday, Aug. 15. In our original review, Christine Chan was mostly positive about the game, even considering the somewhat controversial freemium pricing structure. After a few days with the title, I can easily says it's the best implementation of the model I’ve seen as players can easily finish the game without spending a dime. Even so, if you want to progress faster, EA will happily take your money. Plants vs. Zombies 2 is a universal title for both the iPhone/iPod touch and iPad/iPad mini. It can be downloaded now in the App Store for free. 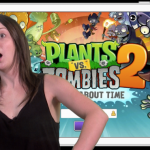 It's About Time You Grabbed Plants Vs. Zombies 2, Now Available On iOS Worldwide
Nothing found :(
Try something else