You are using an outdated browser. Please upgrade your browser to improve your experience.
by Brent Dirks
August 23, 2013
Rovio has just introduced another trailer for its upcoming Angry Birds Star Wars II, and this one is pretty amazing. Here’s the complete trailer. Click here if you can’t see the video. Does the voice of the Pig Emperor sound familiar? Well, Rovio was able to score quite a coup as Ian McDiarmid, the voice of Emperor Palpantine in the six "Star Wars" movies, did the voice over work for the trailer. Here’s a quick behind-the-scenes look with McDiarmid. Click here if you can’t see the video. Being able to “Join the Pork Side” and play as the pigs does sound like a fun concept. I'm interested to see exactly how it fits into the sequel. In a blog post, Rovio said that the game will feature more than 30 bird and pig characters from the Star Wars universe. Starting on Monday, Aug. 26, Rovio will be introducing all of the characters with reveal gameplay trailers. And in an interesting move, at least in the Angry Birds universe, Angry Birds Star Wars II will be universal for both the iPhone/iPod touch and iPad/iPad mini. It will cost $0.99 when it hits the App Store on Thursday, Sept. 19. Players can also use Telepods to transport physical characters into the game using just the camera on an iOS device. If you can’t wait to play the sequel, you can download the original Star Wars Angry Birds in the App Store now. The iPhone/iPod touch version is $0.99 while the HD edition for the iPad/iPad mini will set you back $2.99. 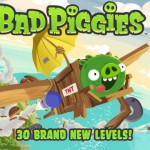 Oink, Oink! Angry Birds Spinoff Bad Piggies Is Apple's Free App Of The Week
Nothing found :(
Try something else