You are using an outdated browser. Please upgrade your browser to improve your experience.
by Joe White
September 6, 2013
One upcoming iPhone 5 accessory offers users a powerful projector and external battery pack, both built into a single smartphone case. The product, developed by personal projector maker Aiptek and called MobileCinema i55, is about to be released in European stores (with sales in the United States starting soon after). Besides offering iDevice users a Lightning-compatible portable projector, MobileCinema i55 also features a double battery pack built into the product, meaning on-the-go projection isn't going to drain your iPhone's battery at such a great rate. Furthermore, Aiptek says its MobileCinema i55 "provides double the brightness of similar products on the market," and it can project images and videos at sizes as big as 60-inches. Other iDevices, such as the iPad mini, are compatible with the projector, which also features a HDMI input port. As 9to5Mac explains:

Other specs include 50 ANSI lumens with a native resolution of 640 x 480 pixels, a built-in speaker, manual focus, USB and micro USB ports for charging non-Lightning devices, and a 3000mAh battery for up to 120 minutes of projection.

Below, we've included a video of MobileCinema i55 in action. http://www.youtube.com/watch?v=HBxbLptdYZs&feature=player_embedded

From what we understand, the product will be available in Europe for £220, and a U.S. launch is scheduled for soon after. We'll keep you updated with further information as we receive it. In the meantime, see: More Evidence Apple's 16GB iPhone 5 Will Live On Surfaces Online, Google Drive 2.0 Features New Design, New Thumbnail View And Other Improvements, and Apple Looking To Launch iPhones With Screens As Large As 6 Inches, Says WSJ. 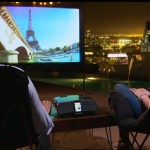 CES 2012: Play Your Videos For Everyone, Anywhere With The Epson MegaPlex! 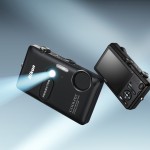 Nikon Introduces A New Camera With Projector That Will Work With An iDevice
Nothing found :(
Try something else