You are using an outdated browser. Please upgrade your browser to improve your experience.
by Bryan M. Wolfe
September 6, 2013
It looks like Mac users will have to wait a little bit longer to experience OS X Mavericks. Apple’s new operating system for Macs isn’t expected to launch until the end of October, according to 9to5Mac. According to the report, Apple will not announce the release date of OS X Mavericks at next week's iPhone event. Instead, the launch will be announced at a separate event a few weeks later. They note:

For the launch of both OS X Lion and OS X Mountain Lion, Apple released the new operating systems the day following an earning results release. Apple traditionally shares its Q4 earnings numbers during the second half of October, so perhaps Apple will release Mavericks the day following its Q4 results announcement…

What To Expect At Apple's Tuesday Event Beyond New iPhones 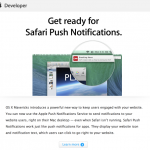 Apple To Enable iOS-Inspired Safari Push Notifications For Developers In OS X Mavericks
Nothing found :(
Try something else