You are using an outdated browser. Please upgrade your browser to improve your experience.
by Joe White
September 2, 2013
Take a look at the above image: could this be the iWatch's main competition? According to a number of different sources, the above is a picture of Samsung's forthcoming Galaxy Gear smart watch - or rather, an early developer prototype of the product. The finalized item, GigaOM reports, is actually a "different, more finished product," but the images (more of which are included below) nevertheless provide iDevice users with an idea of what Samsung is going to bring to the smart watch table later this year. Published originally by VentureBeat, the website explains:

At about 3 inches diagonally, the Samsung Galaxy Gear smartwatch is quite large. Although its screen is square, large bezels on the top and bottom give it a chunky, rectangular shape, with rounded corners. The color is fairly basic — dark black and grey, although it may be enhanced in the final version. The wristband is clunky and masculine, large enough to hold speakers in the clasp.

Features include Bluetooth connectivity, Wi-Fi, and the ability to access the Internet (including email) even when disconnected from an accompanying smartphone. The prototype also reportedly includes a 4-MP camera and built-in speakers, VentureBeat notes, along with the following: Here's hoping we find out more about the Samsung Galaxy Gear in the coming weeks. If anything, the Apple competitor's product at least gives iDevice owners an idea of what we may dare to expect from the Cupertino, Calif. company's own iWatch - if such a smart watch ever becomes available. We'll keep you updated with further information as we receive it. In the meantime, see: U.S. iPhone Carrier Verizon Wireless In Impressive $130 Billion Deal, Magic 2014 To Gain New Decks In First Expansion Update Coming Later This Month, and Japanese Internet Company Rakuten Acquires Global TV Service Viki. 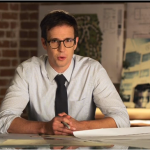 Hilarious Take On 'Every Tech Commercial' 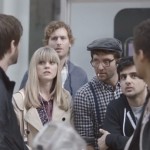 Why Does Samsung Continue To Mock Apple In Ads? Because It Works
Nothing found :(
Try something else