You are using an outdated browser. Please upgrade your browser to improve your experience.
by Bryan M. Wolfe
September 25, 2013
Apple is almost certainly about to announce another "special event" for sometime in October. With this in mind, it’s time to update our projections for this second media event in as many months.

It seems like we’ve been waiting for OS X Mavericks for a very long time. Since first announcing the update in June, Apple has released eight developer previews. As one such developer recently told AppAdvice, “it’s almost ready.” Developer Preview 8 arrived on Sept. 16.

Bring on the new MacBook Pro

New iMacs were quietly announced earlier this week. Like the newest MacBook Airs, these models include Intel’s latest processor, “Haswell.” What remains, of course, are updates to the MacBook Pro and Mac mini, both which should come very soon. Also expected in the coming weeks is the next-generation Mac Pro, which was first unveiled at WWDC.

There have been very few iPad leaks this year, which is very strange given the truckload of stories that led up to the launch earlier this month of the iPhone 5c and iPhone 5s. The iPad 5 is likely to be much thinner than previous models, while the iPad mini 2 should receive the Retina display treatment. Both should be powered by a new Apple A7X processor and include better cameras. And yes, the iPad 5 should be available in space gray.

Could this be the year that Apple finally announces an actual television? Unlikely, but you never know. Were Apple to announce new MacBook Pros in a manner similar to how they launched the new iMacs this week, watch out. That would signal something far bigger than new Macs are coming this fall.

In 2012, Apple announced its Oct. 23 iPad mini event on Oct. 16. Assuming that Apple sticks to a similar schedule this year, we should expect invitations to arrive for the event on or around Oct. 14. Stay tuned. Photo: The California Theater, site of last year's iPad mini event. 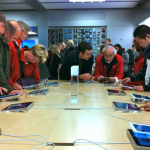 As Apple Preps New Devices, A First Look At iPad Trade In Values For 2013 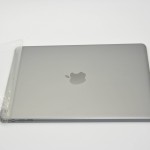