You are using an outdated browser. Please upgrade your browser to improve your experience.
by Joe White
September 25, 2013
Apple is expected to launch its forthcoming iPads in three colors: "space gray," white and silver, and white and gold. Now, however, the purported images of a space gray-colored fifth-generation iPad have recently appeared online, and provide iDevice users with an idea of what Apple's iPad 5 could look like with the new design. In addition, a number of shots depicting the white and silver model are also included, and the internal components of both iPads are visible to an extent. More importantly, though, the images indicate that Apple is indeed set to offer a space gray-colored iPad 5 and a white and silver iPad 5; a gold iPad 5 is therefore likely to launch, too. Further images are included below, and you can check out the entire selection over at Sonny Dickson's website. As a reminder, so far Apple has launched a space gray iPhone 5s, iPod touch, iPod nano, and iPod shuffle. Though shipping estimates vary, all four can be purchased in the Apple Online Store. See also: Popular Twitter Client Echofon Updated To Version 7.0 For iOS 7, Microsoft's Photosynth Panorama Creation App Finally Goes Social On iOS, and AppleCare+ Now Covers International Support Services For iPhone, iPod And iPad. [gallery] 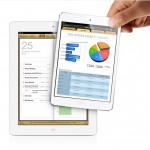 Will Apple’s Next Special Event Happen On Oct. 15?