You are using an outdated browser. Please upgrade your browser to improve your experience.
by Joe White
September 29, 2013
In a new video, Chinese parts supplier sw-box.com goes hands-on with a purported iPad 5 unit, and investigates how the fifth-generation 9.7-inch tablet measures up against both the iPad 4 and iPad mini. As a reminder, recent analysis concerning the iPad 5 has indicated that Apple is expected to implement the design of the iPad mini, creating a large screen iDevice with a thinner bezel and a smaller overall surface area, while maintaining the tablet's 9.7-inch screen. Furthermore, Apple may be planning on announcing and launching its new iPads as part of "an October surprise," which could also see the release of both OS X Mavericks and a new Apple TV. Now, however, one video claims to go hands-on with the iPad 5 ahead of schedule, and provides iDevice users with a better idea of what can be expected once Apple makes its anticipated iPad announcements. In the video (which reached us from MacRumors), Apple's iPad 5 is measured against both an iPad 4 and iPad mini. As you can see, in terms of both height and width, the fifth-generation iPad is narrower than its fourth-generation counterpart, resulting in an overall smaller surface area. The purported iPad 5 also looks a lot like the iPad mini, and borrows from the small-size iDevice's form factor in a number of different ways. This contributes towards the changes in dimensions, and also results in a flatter, more streamlined design. Here's the video, see what you think: http://www.youtube.com/watch?v=J84xWlkYjKc&feature=player_embedded

As mentioned, Apple is expected to unveil its next-generation iPads in October. We'll keep you updated with further information as we receive it. In the meantime, see: How To Launch App Specific Settings With Siri In iOS 7, Today's Best Apps: Hills Of Glory 3D And JA Build Your Future, and Quirky App Of The Day: Even The Undead Need An Education In Zombie College. 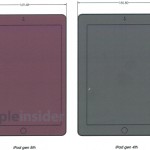 Apple May Not Ship The Retina iPad mini Alongside The iPad 5 This Year
Nothing found :(
Try something else