You are using an outdated browser. Please upgrade your browser to improve your experience.
by Joe White
September 25, 2013
Nissan has confirmed that it will be the sole car manufacturer to create advertisements for iTunes Radio through 2013. The news comes shortly after iTunes Radio, Apple's free (albeit ad-supported) music-streaming service, launched in the United States. As a reminder, iTunes Radio allows users to listen to music in the iTunes app or on an iDevice, and the platform is supported by advertisements from a number of high-profile companies. One such company is Nissan, who is Apple's exclusive automative launch partner for iTunes Radio. In a press release announcing the news, the car manufacturer explained that it plans to create unique ads for Apple's platform, and will deliver special "newsworthy moments" in support of the role-out of its 2014 Nissan Rogue and more. Nissan continues:

Nissan today announced that it will serve as the exclusive automotive partner for the launch of Apple's iTunes Radio, taking advantage of new creative formats, including audio and video, across Apple TV, iPhone, iPad, iPod touch, Mac and PC. Among the first Nissan vehicles to be highlighted with unique iTunes Radio materials are the upcoming, totally resigned 2014 Nissan Rogue compact SUV, the all-new 2014 Nissan Versa Note and the hot-selling Nissan LEAF electric vehicle.

Back in August, we explained that further high-profile companies set to advertise using iTunes Radio include McDonald’s, Pepsi, and Procter & Gamble. Jon Brancheau, vice president of Marketing for Nissan North America, Inc., said: "Nissan, as a brand also known for innovation, is proud to support iTunes Radio from the very beginning, with content relevant to consumers' interests. We see iTunes Radio being a huge success and we look forward to delivering amazing brand experiences to this exciting new audience." How are you liking iTunes Radio? See also: Couple-Centric App Avocado Updated With iOS 7-Style Design And New Features, Umano 3.0 Introduces iOS 7-Inspired Redesign And New Premium Subscription, and Give Your Handset An iPhone 5s Makeover With This Upgrade Kit. 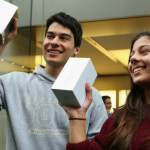 Apple Announces Its First Weekend iPhone Sales: Best Launch To Date
Nothing found :(
Try something else