You are using an outdated browser. Please upgrade your browser to improve your experience.
by Brent Dirks
September 19, 2013
Bummed out after installing iOS 7 on your iPhone or iPad? Singer and songwriter Jonathan Mann has a hysterical "tutorial" that should help alleviate those fears, at least for a bit. Here is his take on the latest and greatest software from Apple. Click here if you can’t see the video. Mann should look familiar to Apple fans and hardcore users of YouTube. He shot to fame in 2009 after he began to film a daily music video for an original song in his “Song a Day” channel. One of his most viewed videos ever, the iPhone Antenna Song, made fun of the infamous iPhone 4 “issues.” Click here if you can’t see the video. Steve Jobs even briefly showed the video during his press conference regarding “Antennagate.” But in all seriousness, if you dislike iOS 7 at first pass, be patient. I’ve been using it since the first beta was released back in June. And while it did take some time to acclimate to the radical new look, the huge amount of new features makes the change easily worth it. 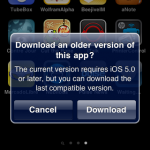 Apple Tweaks Its Policy Regarding The Availability Of Older App Versions

The Kids Category Officially Launches In The App Store
Nothing found :(
Try something else