You are using an outdated browser. Please upgrade your browser to improve your experience.
by Joe White
October 22, 2013
It doesn't come as much of a surprise, but U.S. carrier T-Mobile is set to offer both the iPad Air and the iPad mini with Retina display, once the new tablets launch on Nov. 1. Of course, we'd heard from T-Mobile chief executive officer John Legere that the so-called "uncarrier" could have exciting news on Oct. 22. Now, it seems we've got the confirmation needed from Apple itself: as you can see in the below image, T-Mobile, along with AT&T, Verizon, and Sprint, is listed as an option when customers purchase a Wi-Fi + Cellular iPad. Furthermore, it seems T-Mobile could even offer the iPad models on its popular "uncarrier" plans. Once again, the news comes in the form of an enigmatic (but highly suggestive) Twitter update from the carrier's CEO. John Legere said:

Apple just finished their event and we’re proud to be a part of it. But how do we make this #uncarrier? Hmm… — John Legere (@JohnLegere) October 22, 2013

More specifically, however, T-Mobile is actually said to be offering new iPad users 200MB per month of free data. The Verge explains:

As mentioned, both Apple's iPad Air and its iPad mini with Retina display go on sale on Nov. 1. We'll keep you updated with further information as we receive it. In the meantime, see: No Touch ID On New iPads: Is Apple Having Issues With The Fingerprint Sensor?, Apple's iPad mini With Retina Display Comes In A 128GB Model, and Apple Brings Its Space Gray Color Option To The iPad mini. 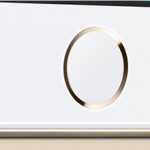 No Touch ID On New iPads: Is Apple Having Issues With The Fingerprint Sensor? 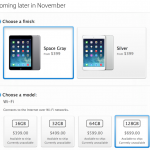 Apple's iPad mini With Retina Display Comes In A 128GB Model
Nothing found :(
Try something else