You are using an outdated browser. Please upgrade your browser to improve your experience.
by Joe White
October 18, 2013
See updates below. Oceanhorn: Monster of Uncharted Seas is set to hit the App Store at some point in 2013, and now, the anticipated Legend of Zelda-style title has a release date ... kind of. Developer FDG Entertainment has published a screenshot from the upcoming game, and claims that a clue to Oceanhorn's release date is hidden somewhere within. Here's the screenshot, which reached us from TouchArcade. Grab your deerstalker and pipe, and see what you think: One potential lead of interest comes from the obvious "seven," highlighted in the bow and arrow icon. Given that Oct. 7 has already passed, it could be that Oceanhorn's release date is set for Nov. 7, or even Dec. 7. TouchArcade adds that Nov. 7, however, is a significant date for the app:

However, even more fitting with the idea of a release on the 7th is that November 7th, 2011 marks the day that Oceanhorn was first unveiled to the world. [...] That makes it kind of a meaningful day, don't you think?

Could an Oct. 31 release date be a possibility, too, since "Halloweenish" antagonists adorn the screenshot? Let us know in the comments if you've been able to interpret the screenshot in any other way. In the meantime, you can find out more about Oceanhorn by checking our original article. We'll keep you updated with further information as we receive it. Update. As noted by our astute commenter "Hil," since the astrological star sign associated with most of the month of December (Nov. 22 to Dec. 21) is Sagittarius - symbolized as a centaur wielding a bow and arrow - it seems that the release date for Oceanhorn is indeed likely to be Dec. 7, after all. Update 2. Max, in the comments, points to the original caption included with the image over at Oceanhorn's own website. Here, lyrics from "November Rain" are quoted: "It's hard to hold a candle - in the cold ...," leading Max to believe that November, rather than December, is the month we'll see Oceanhorn launch. As such, could Nov. 7 be the date we're waiting for? See also: Yahoo Screen Updated With AirPlay Support And Push Notifications For Videos, J.D. Power's Smartphone Satisfaction Rankings Place Apple, Samsung At No. 1, and Pinterest 3.0 Brings New iOS 7-Inspired Design And New Way To Navigate Between Pins. 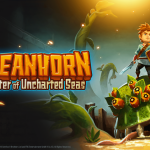 The Adventure Is Set To Begin: Oceanhorn Gets Its First Official Trailer
Nothing found :(
Try something else