You are using an outdated browser. Please upgrade your browser to improve your experience.
by Joe White
October 23, 2013
Apple's brand new iPad mini might feature a Retina display and a 64-bit Apple A7 processor, but the iDevice has suffered a price hike and in Britain starts at a hefty £319. This side of the pond, a number of tablets are available on the market, but how does Apple's iPad mini with Retina display compare? Fortunately, one detailed chart can help. The chart, which reached us from Gizmodo, compares the iPad mini with Retina display against the first-generation iPad mini, the new Google Nexus 7, the Kindle Fire HDX, Tesco's Hudl, and the Samsung Galaxy Note 8. Points of comparison include CPU, display, storage, RAM, thickness, price - an important (and highly changable) factor - and a lot more, and to remain the most popular seven-inch tablet we knew that Apple's updated iPad mini would have to compete on a number of different fronts. Here's the chart, see what you think: Apple's iPad mini with Retina display is the most expensive small-size tablet compared, but as the chart indicates, it's the most impressive, too. Of course, the new iPad mini isn't the thinnest or lightest tablet - the addition of its high resolution Retina display is responsible for this. However, in terms of CPU, display, storage, cameras, and networking, it's as good as - and, in most cases, better than - its rival tablets. Though in Britain, as in the United States and in countries around the world, Apple's iDevices are judged on more than just their individual specifications: word of mouth means a lot of people here know that with the iPad, Apple offers a quality piece of consumer technology that combines great software and well-designed hardware perfectly. That being said, it's nevertheless good to hear that the iPad mini has been improved under the hood - even if Touch ID, Apple's fingerprint scanning technology, didn't make it this time round. For a closer look at the new iPad mini, check out our hands-on article. Remember, too, that AppAdvice is now tracking Apple's work outside of the United States in a brand new column published Tuesdays, called AppAdvice International. See also: Griffin's Super-Strong Survivor Case Will Ship For iPad Air From Nov. 1, Bring Out The Popcorn: Apple Adds New Apple TV Channel For Watching iMovie Theater, and Pronto Push Brings Mavericks' Safari Push Notifications To Life. 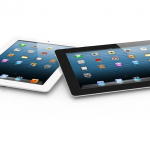 If You’re Getting Ready To Buy An iPad, Check Out Apple’s Refurbished Models First