You are using an outdated browser. Please upgrade your browser to improve your experience.
by Joe White
October 23, 2013
To compliment the surprise of its new iPad name, it looks like Apple has put together a new wallpaper dedicated to the iPad Air. The blue-green gradient wallpaper isn't included in iOS 7, and so far has appeared on a selection of the online promotional images used for the new 9.7-inch iPad. Fortunately, iPhone and iPad owners can get the new wallpaper right now. The iPad Air wallpaper reached us from iDownloadBlog, which offers both an iPhone version and an iPad version. You can download them to your iDevice by touching each image to enlarge it, saving it to your Photos app, and selecting it as a wallpaper from the built-in Settings app. Here are the images: Of course, a new name and new wallpaper aren't the only changes made to Apple's 9.7-inch iPad. The iPad Air also features an iPad mini-like design, a 64-bit Apple A7 processor, an M7 coprocessor, and a number of further enhancements. It's set to go on sale on Nov. 1, with prices starting at $499. For more information on the iPad Air, be sure to take a look at our hands-on article. See also: Suffering From iOS 7 Motion Sickness? The New iOS 7.0.3 Update May Hold The Cure, In The U.K., How Does Apple's New iPad mini Compare Against Its Competition?, and Griffin's Super-Strong Survivor Case Will Ship For iPad Air From Nov. 1. 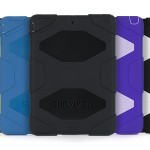