You are using an outdated browser. Please upgrade your browser to improve your experience.
by Dom Esposito
October 3, 2013
A new Mavericks build has just been seeded to AppleSeed beta testing members. The new seed carries a build number of 13A598 and comes a little more than two weeks after the release of Mavericks Developer Preview 8. It’s unclear when OS X Mavericks will be released to the public, but according to 9to5Mac, this new seed could be the upcoming GM release:

AppleSeed members believe that this build is a GM candidate, but a source says that the public release build will actually be a couple of versions newer. The source has also corroborated our previous report by indicating that OS X Mavericks is currently scheduled to arrive on the Mac App Store within the last ten days of the month of October. Mavericks was supposed to reach GM status a few weeks ago, but critical bugs have kept pushing back the release, according to claims from sources.

The site also notes that the new Mavericks build brings the ability to block Apple IDs and phone numbers within the Messages and FaceTime applications. We've expected this feature to migrate over to Mavericks, but as 9to5Mac notes, it hasn't been present in any previous Mavericks Developer Preview release. It's also mentioned that Mavericks may mark the official launch of iCloud Keychain which was removed from iOS 7 prior to its launch. It’s very likely that OS X Mavericks will be released alongside new MacBooks and the anticipated Mac Pro refresh in late October 2013. Currently, there’s no keynote date for Apple’s second round of 2013 product launches, but a recent discoveries hint that Mavericks’ release is very close. 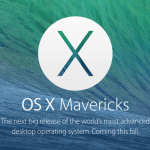