You are using an outdated browser. Please upgrade your browser to improve your experience.
by Joe White
October 23, 2013
Apple released iOS 7.0.3 yesterday, making a number of minor changes to our iDevices. Fortunately for those planning on jailbreaking their iOS 7-powered iPhone, iPad, or iPod touch, jailbreak hacker @MuscleNerd has confirmed that iOS 7.0.3 is safe for prospective jailbreakers to download. The news arrived in a Twitter update published from @MuscleNerd's account. Though the hacker first warned jailbreakers that iOS 7.0.3 could ship with exploit patches, he later confirmed that it's safe to download. His Twitter update read:

Of course, this is great news for prospective jailbreakers prone to a bout of motion sickness. As a reminder, iOS 7.0.3 offers enhanced Reduce Motion features, which should help iDevice users who'd been feeling slightly queasy after using Apple's iOS 7. Earlier today, we explained:

But kidding aside, iOS 7 has been offering an option to reduce motion, which can be accessed by going to Settings > General > Accessibility > Reduce Motion. But this option reduces only the parallax effect of icons and alerts. That is, until now, with the release of iOS 7.0.3, which deactivates the zooming effect in opening and closing apps and folders. Instead of zooming in and out of the interface, apps and folders now fade gently in and out when the Reduce Motion option is enabled.

So, even if you're planning on jailbreaking your iOS 7-powered iDevice further down the line, there's no harm in updating to iOS 7.0.3 now. Plus, it could be that you start feeling a whole lot better after doing so. If you haven't downloaded it already, you'll find the minor update within the "Software Update" section of the Settings app. See also: The Early Bird: Belkin Unveils Lots Of Brand New iPad Air Accessories, Kurrency Updated With "Shake To Colorize" Feature Plus History And Favorites Sections, and Shop In Style: Gilt For iPhone Updated With iOS 7 Redesign Plus Other Improvements. 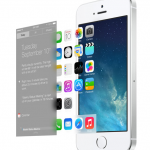 Suffering From iOS 7 Motion Sickness? The New iOS 7.0.3 Update May Hold The Cure 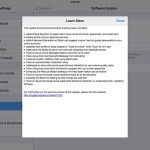 Apple Releases iOS 7.0.3 To The Public With iMessage Fixes
Nothing found :(
Try something else