You are using an outdated browser. Please upgrade your browser to improve your experience.
by Joe White
October 29, 2013
Tim Cook hinted during his recent financial results conference call that elusive "new product categories," possibly consisting of an iWatch or Apple HDTV, could come from the Cupertino, Calif. company in the near future. As a reminder, Apple's third quarter financial results saw impressive iPhone sales, less impressive iPad sales, and a decrease in Mac sales. During Tim Cook's subsequent conference call with analysts and investors, however, MacRumors notes that one analyst, in particular, was more interested in the potential of new product categories coming from Apple in 2014 (as has previously been rumored). Here's the question posed to Cook:

Didn’t say you would see them in 2013 and 2014, but you will see exciting new products from us in the fall and across 2014. I stand by that and you’ve seen a lot of things over the last couple of months. In terms of new product categories specifically, if you look at the skills that Apple has from hardware/software and services, and the incredible app ecosystem, this set of things is very unique. No one has a set of skills like this. We obviously believe that we can use our skills at building other great products that are in categories that represent areas that we do not participate today. We’re pretty confident about that.

It feels a little bit like Cook was dodging the question posed here, which is of course understandable; it's late 2013, and Apple as a company can't be shoehorned into a position where not only new products, but "new product categories," the likes of which we've never seen from Cupertino, are demanded by analysts and consumers next year. However, the answer offered by Cook is nevertheless positive. He obviously indicates that Apple is actively investigating and planning new products that utilize the hardware, software, and services offered by Apple, clearly insinuating that the App Store platform and iCloud could be transplanted over into a new product - or into new products - some time in the future. Problematically, of course, no date is mentioned. Most agree that a smart watch-style product from Apple is in the cards for 2014, and given that Samsung has launched its own wristwatch product it would be wise for Cupertino to compete in the near future (even if Samsung's offering has been universally condemned by critics). The long-rumored Apple HDTV is another possibility, and recent reports have indicated that hardware - and specifically, 4K displays - could be married with Apple TV-like services in order to create the product. Of course, it could also be that Apple is working on a product none of us are expecting, which is an exciting (albeit, perhaps, unlikely) prospect. We'll keep you updated with further information as we receive it. In the meantime, see: Tim Cook Thanks Staff In Email, Holding Employee Meeting Today, AppAdvice International: New iPads, iPhone Launch Dates, Steve Wozniak And More, and Demand For The Second-Gen iPad mini Could Prove Too Much For Apple, Cook Warns. 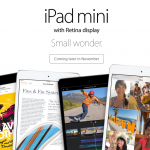 Demand For The Second-Gen iPad mini Could Prove Too Much For Apple, Cook Warns
Nothing found :(
Try something else