You are using an outdated browser. Please upgrade your browser to improve your experience.
by Joe White
October 22, 2013
The anticipated Apple HDTV has been in the Apple pipeline longer than the Cupertino, Calif. company's iPad 5, iPad mini 2, or even its iWatch. If one analyst is to be believed, however, the wait is almost over. As Bloomberg explains, the news comes from Masahiko Ishino with Advanced Research Japan, who published a research note recently claiming that the long-rumored product is set to hit the market next year, in 2014. Ishino suggests that Apple's HDTV will indeed be worth waiting for: the Tokyo-based analyst argues that 55-inch and 65-inch models are in the pipeline, and that the television sets will feature ultra-high definition 4K displays. Bloomberg notes:

LG Display Co. (034220), Samsung (005930) Electronics Co. and Corning Inc. (GLW) may be among the suppliers for Apple’s TVs, which may be priced at about $1,500 to $2,500, Ishino said. LG Display may supply more than 70 percent of the liquid-crystal displays, Samsung may make graphic processing units and Corning’s Gorilla Glass 3 may be used as the cover, he said. Taiwan’s Foxconn Technology Group probably will be hired to assemble the devices, according to Ishino.

The news comes following a similar report from NPD DisplaySearch, which also argued that an Apple HDTV product is set for a 2014 release. Of course, most of us are wondering whether Apple's set-top box, the Apple TV, is to be updated later today. Though Amazon's European storefront suggested that a new product could be announced, a recent article from longtime Apple commentator MG Siegler warned consumers that an expected fourth-generation Apple TV might not arrive this month, after all. Also in the cards for today's event are updated iPads and Macs, along with an anticipated OS X Mavericks release date. As a reminder, Apple's media event is set to begin at 10 a.m. PDT; we'll be covering the day's news from start to finish, so be sure to check back with us. In the meantime, see: Boxes Introduces Pinterest-Like Feature For Adding Items Directly From The Web, For September, Apple Was The No. 1 U.S. Smartphone Seller, and The Zombie Bad Piggies Shall Rise In Angry Birds Friends' Halloween Tournament. 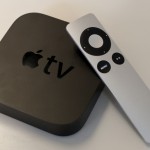 It Could Be Apple Isn't Ready To Unveil New Apple TV Hardware Yet
Nothing found :(
Try something else