You are using an outdated browser. Please upgrade your browser to improve your experience.
by Joe White
November 2, 2013
Clarifying its recent "U.S. Tablet Satisfaction Study" results, J.D. Power has noted that Samsung beat Apple to the No. 1 position on price, more than anything else. The news comes following the publication of J.D. Power's original report, which amassed data collected from 3,375 surveys and proclaimed that Samsung's tablets ranked higher over its competitors, including Apple and Amazon. The Cupertino, Calif. company, however, took the No. 2 position and was just two points behind Samsung. As we explained in our original report:

Samsung ranked first with 835 points while Apple was second with 833 points. While Samsung improved in each category measured since the last survey period in April, Apple performed very well in performance and ease of operation. Amazon came in third place with a score of 826.

Now, however, J.D. Power has shed a little more light on its decision-making process, explaining how Samsung was able to edge ahead of Apple's iPad, despite the latter tablet being consistently ranked higher than the South Korean company's offerings in countless other surveys. In a statement provided to Techpinions, J.D. Power explains:

The Power Circles Rankings are something we provide to consumers to understand the relative rank of brands within each of these five dimensions. The Power Circle Rankings  denote the brand that has the highest score within each factor regardless of how much higher their score is. In the case of Apple in the tablet study, although it did score higher on four out of five factors measured, its score was only marginally better than Samsung’s.  At the same time, however, Apple’s score on cost was significantly lower than that of all other brands.  In comparison Apple’s ratings on cost was more than 100 points lower than Samsung’s.  As such, even though its ratings on other factor was slightly higher than Samsung’s, Apple’s performance on cost resulted in an overall lower score than Samsung. In this cost-conscious environment, cost is a key factor in many products purchase and services they use.  Tablets are no exception, where cost is a key driver of the overall customer experience with their device. Although “cost” has the lowest weight among the five factors that drive satisfaction, the notable difference between Samsung’s and Apple’s score in the cost factor was enough for Samsung to rank highest in the study.

For the record, here's a graphical representation of the data outlined in J.D. Power's survey. However, those trying to get their head around J.D. Power's logic have struggled. Techpinions, for example, explains: "Apple outscored Samsung by two 'power circles' in each of two categories with a combined weight of 0.48 and by one circle in each of two categories with a combined weight of  0.36. Samsung outscored Apple in one category with a weight of 0.16. Unless the score difference between two circles and four is much, much bigger than the difference between three and five – in which case the whole circles chart is grievously misleading – there is no way Apple’s loss on cost could outweigh it winning in the four other, more heavily weighted, categories." Because raw scores per category aren't revealed, there's a deal of mystery behind J.D. Power's rankings. Instead of providing more in-depth details, Samsung is merely given a score of 835 and Apple is awarded 833 (both out of 1,000). Of course, bragging rights have therefore been awarded to Samsung this time round. But after taking a closer look, consumers will perhaps decide that the aforementioned survey is a fairly weak indication of the state of the tablet market. See also: SoundTracking 4.0 Features New iOS 7-Inspired Design Plus New Discover Tab, For The First Time Ever, Apple's iPhone Goes "On-Contract" In India, and Video: AppAdvice Takes A Closer Look At The iPad Air. 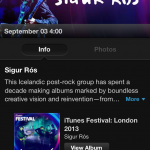 Apple Focuses On New iSight Camera In Latest Magazine Ad For iPhone 5s
Nothing found :(
Try something else