You are using an outdated browser. Please upgrade your browser to improve your experience.
by Aldrin Calimlim
December 22, 2013
Christmas has come a bit early for ardent iOS device jailbreakers. In a rather surprising move, the popular evad3rs hacker team has just released their long-awaited untethered evasi0n iOS 7 jailbreak. Just a week ago, my colleague Joe noted:

Back in September, we heard from one member of the elite iOS hacker-team evad3rs that an iOS 7-compatible jailbreak solution was so far looking good, and soon after, it was claimed that the team may have found the final piece in the iOS 7 jailbreak puzzle. This prompted a number of reports to note that a final release could occur in the immediate future; meanwhile, members of evad3rs told the public that Apple's minor point updates for iOS 7 were safe to download and install.

But then, seemingly out of the blue, the evad3rs team has announced today via Twitter that the evasi0n iOS 7 jailbreak is now available:

Merry Christmas! The iOS 7 jailbreak has been released at http://t.co/wblOSKyLah! All donations will go to @publicknowledge, @eff and @ffii

Here are the requirements for the so-called evasi0n7 jailbreak, which is said to be compatible with all iOS devices running iOS 7.0 through 7.0.4: Of course, should you decide to install evasi0n7, it's recommended that you back up your device first using iTunes or iCloud so you can recover your data in the event that something goes kaput in the process. Good luck! And happy holidays! If you'd like to jailbreak iOS 7 now, check out our video tutorial: 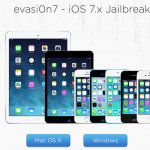 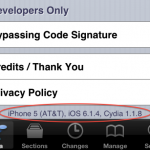 It Looks Like An iOS 6.1.4 Jailbreak Solution Isn't Set To Reach Us This Year After All
Nothing found :(
Try something else